Steve Sic was born to travelling parents and raised in Cornwall, Holland, USA and Germany. After leaving home at the age of 15 he bummed around various places including some of the dirtier big cities of Northern Europe like: Paris,(West)Berlin, London, Antwerp etc. His whole life Sic has been an off the wall Gothic-Punk Artist, musician, eco-anarchist, occultist and freedom fighter.


He started writing and performing obscure Ancient and Pagan music in 1995, working mainly on reconstructing early primitive and Celtic Iron Age music, seeking to rediscover the Shamanic musical roots of Northern Europe. During this process he found(ed) Omnia in 1996.

Steve Sic shares a rather bohemian lifestyle together with his wife Jenny in a tiny house in a small shrinking forest in Holland (a country who's laws on personal freedom are slightly less fascist and ridiculous then in other parts of the world). The rare moments of his life not spent on OMNIA he fills with reading books, smoking grass and making love, while trying to inspire change in the suicidal madness of the human world.


Sic has (up to now) lived in thirty-six different houses in six different countries on two different continents, and as most of this was in Northern Europe this presumably makes him a "European". As a young runaway kid he has lived on the streets and at times he's even had to beg for food. He's never had a 9 to 5 job, he's never finished any form of school. Because a significant part of his early upbringing took place in various rustic villages surrounded by a sufficiency of relatively unspoiled nature to convince him of the importance of the living planet and his part in it. 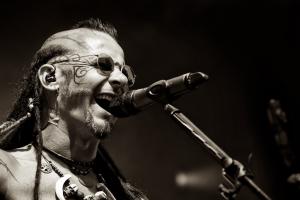 He realised at quite an early age that humans are just spoiled, feral mutated-monkeys with delusions of grandeur who are going to destroy the world they live in due to their in-built stupidity and the fact that they are obviously not natural to this world... This inspired him to style himself as a tree hugging, nature loving, recalcitrant neo-pagan, admitting himself to be "just an animal like the birds and the beez" and worshipping the Natural forces of the Earth and the Creative Soul of the Universe instead of the silly self-important notions and religions of mutant-monkeykind (ie: imaginary friends like the ONE God, Money, Royalty, Science etc.).

In the 90's he helped found the "Chaos in Motion" ART foundation to further the cause of Chaos and Creativity in the world. Throughout the years he has kept himself busy at various professions, including: painter, cartoonist, farm labourer, archeological draughtsman, sword-fighter, beggar, theater props builder, games designer, actor, chaos-monk, fire-artist, eco-activist, philosopher, festival organiser and music producer. Also he has been known to play various different instruments sufficiently well to get away with being regarded as a musician. And he has claimed the title "Pope of Paganism" to keep it safe from harm... because he hates dogma and institutionalised religion ;-)

He taught himself to play all his chosen instruments (which now include: Irish low whistle, Neo-celtic double flutes, Seljefloit, Persian Ney, Shawm, Bodhrán,Dombek, Darabuka, Davúl, Cajon,Guitar, Irish Bouzouki, and a thousand prehistoric ethnic instruments)... but Jenny taught him how to play the harp ;-)

Over the years he has become a nature-shaman and earth-warrior in service of the living planet, with a strong urge to slow down the immenant destuction of our biosphere and to teach the bad monkeys a little sense through musick and wisdom.

He doesn't like international corporations, bureaucratic laws, Governments, the EU, "one-god" dogmas (dogmas are a bitch ;-) and the perverse concept of "Royalty" within a so-called enlightened society (actually... he doesn't really like society much either). He believes that animals and plants have a conscious mind and feelings, he believes that Love and Life are the most important driving forces in our universe (even more powerful than greed), and that "seemingly intelligent life" is the most fun a bunch of sub-atomic particles can have together...
Steve Sic currently lives with his wife Jenny in one of the last tiny forests in Holland.. in a tiny house stuffed to the brim with instruments and works of art... surrounded by birds, squirrels and nature... Here Jenny and Sic spend most of their time (when not performing) composing PaganFolk, smoking homegrown grass, talking to plants and keeping their Pagan-Shamanic 'heya-heya' credibility just beyond a socially acceptable level ... And as ever Chaos rules all, but gently...

END_OF_DOCUMENT_TOKEN_TO_BE_REPLACED

Your shopping cart is empty.